When I first saw FindMyPast I was particularly struck by the maps which show you the person’s location on that census. I could see many uses for that. And the census maps in FindMyPast would be useful — IF they were dependably accurate. But they aren’t. And there are too many I know aren’t to trust those I don’t know.

Robert Downing arrived in Illinois and settled along Salt Creek in the center of the state in 1821. I know what land he bought and where it is. It hasn’t moved since.

In the 1830 Census for SANGAMON County, Illinois, I found Robert Downing. There he is on a page with the folks that were his neighbors at the time, many of whom, or their descendants, would continue as his neighbors the rest of his life. With the transcription is the map of his location. He is found somewhere north of the Decatur airport. Decatur is in Macon County, Illinois.

From the 1840 census for Mt. Pulaski Precinct, LOGAN County, Illinois, I find Robert Downing. He didn’t move. In 1839 Logan was created from Sangamon. The transcript is correct. I know it is the right person, right neighbors, etc. Yet according to the map he is now northeast of Paris in EDGAR County, Illinois, just west of the Illinois-Indiana border. In 1850 he is in the same location in Edgar County. When I began to look for the 1860 census for him FindMyPast crashed.

FindMyPast also has the Social Security Death Index. The searches I did returned what I expected. You can get the SSDI free at FamilySearch.org though.

David Clark of Rahway, New Jersey, married Sarah Winans. They had nine known children, all born in New Jersey. The youngest three, all boys, were David, John Winans and Isaac – our three brothers who went to Illinois. They all went from Rahway to Miami County, Ohio, to Sangamon County, Illinois, although not together.

David Clark  went to Kentucky in 1798 and married Rachel Rutter there about 1800. She died in 1804. He went to Cincinnati in 1805, made brick for the first brick house there, then went back to New Jersey where in 1806 he married Sarah Winans. They became, like his parents, David Clark and Sarah Winans. In 1809 they moved to Miami County, Ohio. David’s oldest son Richard Winans Clark married John Winans’ second daughter Margaret Ann Clark in 1829 in Miami County, Ohio. The same year David, Sarah, the newlyweds and most of David and Sarah’s other children packed up and moved to Sangamon County, Illinois. David was a farmer and a Methodist preacher.

John Winans married Ann “Nancy” Isgrig in Bourbon County, Kentucky. They soon went to Miami County, Ohio. Family records indicate that their son Daniel was born in Ohio in 1812 but John Winans did service in the War of 1812 in the Kentucky Mounted Volunteer Militia, mustering in on August 31, 1813. After that he was undoubtedly in Ohio. He did not settle in Sangamon County, soon to be Logan County, Illinois, until 1838 when he was 60 years old. At that time his eldest daughter Hannah and her husband Asa French also moved to Logan County.

Isaac, the youngest, first married Lydia Zeliph. She died before 1821. He then married the widow Sarah Royal Stought, in Miami County, Ohio.  In 1829 they went Illinois, almost certainly stopping first in Sangamon County, where Sarah’s daughter Hannah by her first marriage married David Ward Clark, a child of Isaac’s brother John Winans, in Sangamon now Logan in 1831. Note that John Winans was not yet in Illinois but several of his children were. Issac settled in Fulton County where he owned a water powered grist mill.

Three brothers did come to Illinois. So far no Indian princesses or royalty. My emigrant Isgrig ancestor was transported to America by his majesty, a prisoner from Old Bailey – does that make a royalty connection? 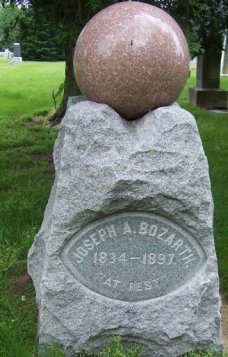 When I had entered my notes on the Wood/Rice research and was checking to make sure I had everything done I remembered that I owned an Illiopolis history. It was put together for the 2006 sesquicentennial of the town by the same Mary Ann Kaylor who tracked down and transcribed the Pritchett Funeral Records. For several years she was the County Coordinator of the Sangamon County ILGenWeb site.

I looked up Charles McCorkle, he who married Hattie Wood. On p. 89 in a section where Mary Ann collected items from old newspapers, I found that “Mrs. Charley McCorkle, Miss Louesa Rice and Elmer Rice spent Friday in Springfield.” Unfortunately there is no date but it is in the 1923-1934 section.

I also learned in the same section that “After spending a month visiting friends and relatives in this community, Mr. and Mrs. Charley McCorkle returned to their home near Alexandria, Indiana, early Saturday morning.”

Later on I learned that McCorkle was a member of and made tables for the new Christian Church in 1905 and that he had been a janitor in an Illiopolis school.

Also working at the school was Sanders Rice. Remember, Hattie Wood McCorkle’s mother was a Rice. Those Rices weren’t from the same county area and the census does not list other Rices in the area. But I do know Sanders Rice. He was married to Lovina Wood, my great grandaunt from my maternal Wood line.

In the course of tracking this down I located Emily Rice Wood Beason living with a Beason son whose name I cannot make out, possibly Oscar, born June 1881 and Cline McCorkle, born May 1889, grandson, but not with Joseph Beason on the 1900 census. He is a boarder in town. Obviously a split. Did she also split from William Wood? Is that what caused her to use her maiden name when marrying Beason?

The more you learn the more questions you have.

Earlier this week when I found myself with a free hour I decided to work a question in my genealogy. It couldn’t take more than an hour or so and had to be doable free online.

I chose my paternal grandmother’s family which I have not ignored but have not done much work on. I knew her parents’ names and had information on her mother’s line. I turned to her father’s line, a painfully common name and a puzzle. To complicate matters, in my maternal line and in the same geographic area I have the same common name. I had tracked the line far enough to know the paternal Wood line is not related to the maternal Wood line which I have back nearly 300 years.

Wilma Wood married Robert Rothwell on January 1, 1923. She was the daughter of William Tobias Wood and Eva Nora Bozarth of Illiopolis, Sangamon County, Illinois. I had William Tobias’ death certificate and the marriage record indicating they had married February 17, 1889, in Illiopolis. I knew the state database had a typo on the date. I had tracked back into the Bozarth line a couple generations a few years ago.

Wood was a puzzle. I knew he was born August 23, 1863, in Shelby County, Illinois. I knew that his parents were William Wood Sr. and Emily Rice. I knew that did not mean William Sr. was named Tobias but it might. I knew from the 1860 Shelby County census that Emily’s father was Nathan Rice. I knew William Wood did not appear on the 1870 census although Emily did with William Tobias. Emily appears in the household of Joseph Beason in 1880 with William Tobias listed as his stepson.

I knew a William Wood had served in the Civil War, age 22 in 1863, Pvt., Company F, 5th Illinois US Calvary, who mustered in at Effingham County and mustered out at Springfield in 1865. Emily also had a daughter Hattie Wood who was 13 on the 1880 census – although she does not appear on the 1870 census. This would suggest William Wood returned from the Civil War, fathered a daughter and died between 1866 and 1870. A Civil War pension search is on the to do list.

Using the Sangamon County ILGenWeb site I found that Emily was buried at Riverside Cemetery. The Pritchett Funeral Records transcription by Mary Ann Kaylor on the same site indicate Emily’s age at death as 83 years, 2 months and 13 days. Using an online birth date calculator I got a birth date of February 14, 1844.

The same records list Emily’s parents as Nathan Rice and [unknown first name] Little. Back to the Illinois State Archives databases where I found Nathan Rice married Emily Little on March 13, 1828, in Shelby County, Illinois. Presumably there were children born between the marriage in 1828 and Emily’s birth in 1844 who are just waiting to be found. While I was there I found a Hattie Wood married a Charles H. McCorkle in Sangamon County on March 28, 1886. On another day I’ll tell why I’m sure that is my great grandaunt.

Lots more to go but in a little over an hour I was able to find plenty of new leads to check out free online.