I have been playing with the facial recognition in Picassa 3.5, Google’s free photo organizing and editing software. I have a lot of pictures scanned [and at least as many to scan]. Working with photos is not my favorite thing. After playing with the latest version of Picassa for about an hour I’m down to only 9,000 to identify!

The most interesting thing to me is it often chooses family members as potential matches. When I was labeling my granddaughter Marly’s pictures it brought up for my consideration some of her sister Sarah’s pictures. It did the same with my brothers.

I was hopeful that it would use this family resemblance to help identify some of my unknown ancestors but that has not happened so far. The only photo it has identified that I didn’t know was one baby picture. It suggested it was my #2 brother. Upon closer inspection I believe it is. So there is hope it will find others as I start to identify the ancestors.

By pulling up the faces it did show me pictures I didn’t even remember or know I had, an interesting side benefit.

I don’t like the way it wants to link the pictures with an email address from my Google contacts. To foil it I used full names for men, maiden and married names for women. For those woman who don’t use a married name I included their middle name. It seems to be looking for a perfect match in contacts and accepts these as new people. Of course, the problem will not arise with the old pictures but I tested on those I was sure about.

The price – free – is right so you have nothing to lose and maybe some photos to identify.

Do you know this couple? How about the child below?

These are some of the unidentified pictures at the Logan County Genealogical & Historical Society in Lincoln, Illinois. Someone said they thought these and several more were Lucases. Abraham and Marcy Kelsey Lucas were prolific and their children took after them so there are thousands of Lucas descendants. I don’t know these. If you have a clue let me know. 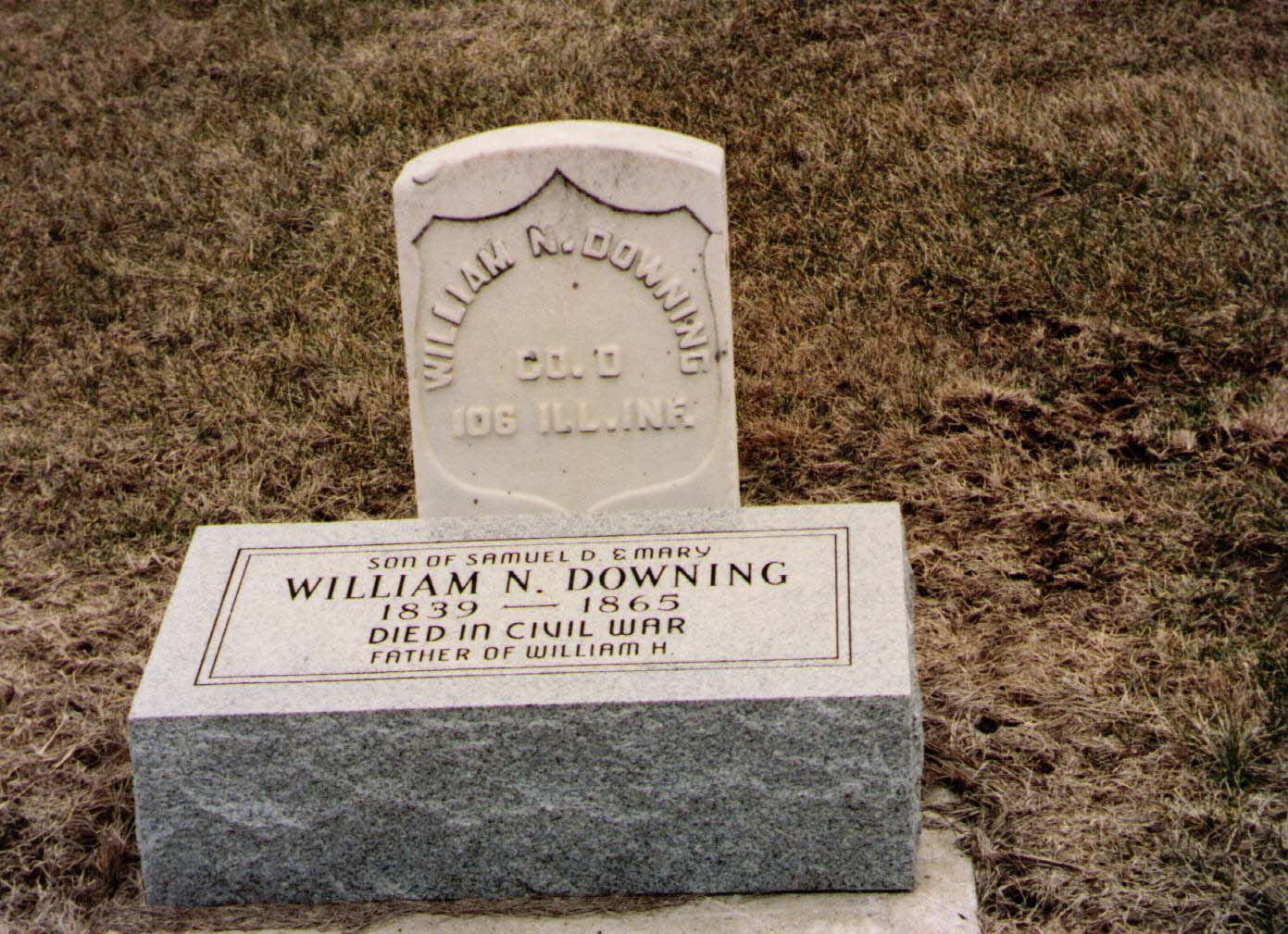 William Nelson Downing married Delilah Downing [no evidence of them being related has ever been found] and soon departed for service with the 106th Illinois. She was pregnant. He never returned, never saw his son.

He’s buried at Downing Cemetery with his father and other relatives. She’s buried at Bowers Templeman with her parents, grandparents and other Downing relatives. She and her second husband have an imposing stone. More than 20 years ago some of his descendants decided to give him a better one. His father got a new one also.

Several years ago I received this story from Valerie Anlage of Maryland. It is about her ancestor Charles Harper, a Choctaw Indian who settled in Logan County. The narrative includes John Andrew and Esther Jane Scroggin Buckles, my ancestors.

“In 1903 many of my ancestors applied to the Dawes Commission for identification as Missisippi Choctaws with the hopes of obtaining land in Oklahoma. They all claimed to be descendants of Charles HARPER, a full-blooded Choctaw Indian. One of the applicants requested that the Commission secure testimonies from Esther Jane (SCROGGIN) and John BUCKELS, aged 75 and 80 years respectively, of Mt. Pulaski, Illinois in support of his application.

Other witnesses named include Leonard K Scroggins, aged 83 of Mt. Pulaski, Polly Ridgeway and Robert Cass, each over 80, both of Buffalo Hart Grove, and Lydia Burke, also over 80 and living in Cornland.

As far as I know, Charles HARPER arrived in what would become Logan County in 1828. 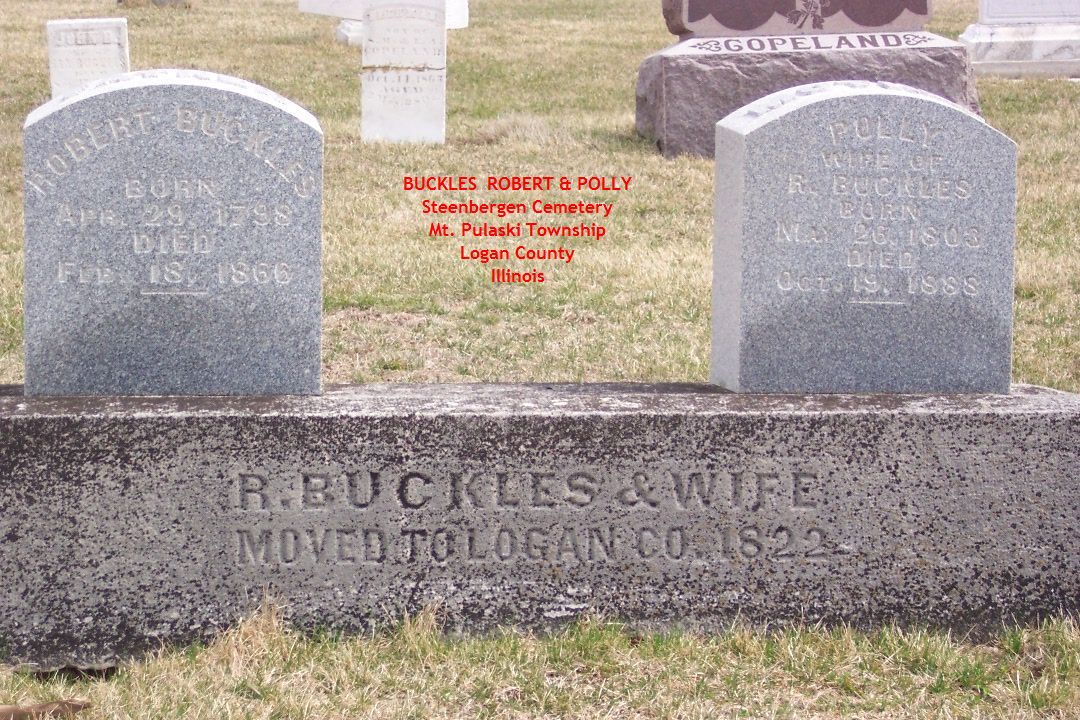 We are thinking about swine flu vaccine. In the early 1950s polio was the deadly threat. In Logan County there was a woman who had worked tirelessly for the National Foundation for Infantile Paralysis – you know it as the March of Dimes – since its founding in 1938. When the Salk vaccine was made available in 1953 and shots were to begin they chose Ethel Ryan Downing to select the first first or second grader in Logan County to receive the shot. Before she could chose it was discovered one of her many grandchildren was in fact a first grader at Mt. Pulaski. She didn’t want to chose him, feeling it was selfish, but the organization insisted.

Thus it was that on his mother’s birthday in 1953, Ethel Downing’s grandson Terry, dressed in his cowboy shirt, got the first polio vaccine in Logan County, followed closely by all the other first and second graders in the county.

No one knew why she was so devoted to that particular cause. Her husband Ellis said she volunteered for so many organizations but that one had a real hold on her. He didn’t know why either. The organization was founded by President Franklin D. Roosevelt but Ethel was a staunch Republican. She knew no one with polio. She continued to work for the organization until polio was conquered. They didn’t forget her. When she died in 1975 one of the biggest wreaths came from the March of Dimes. 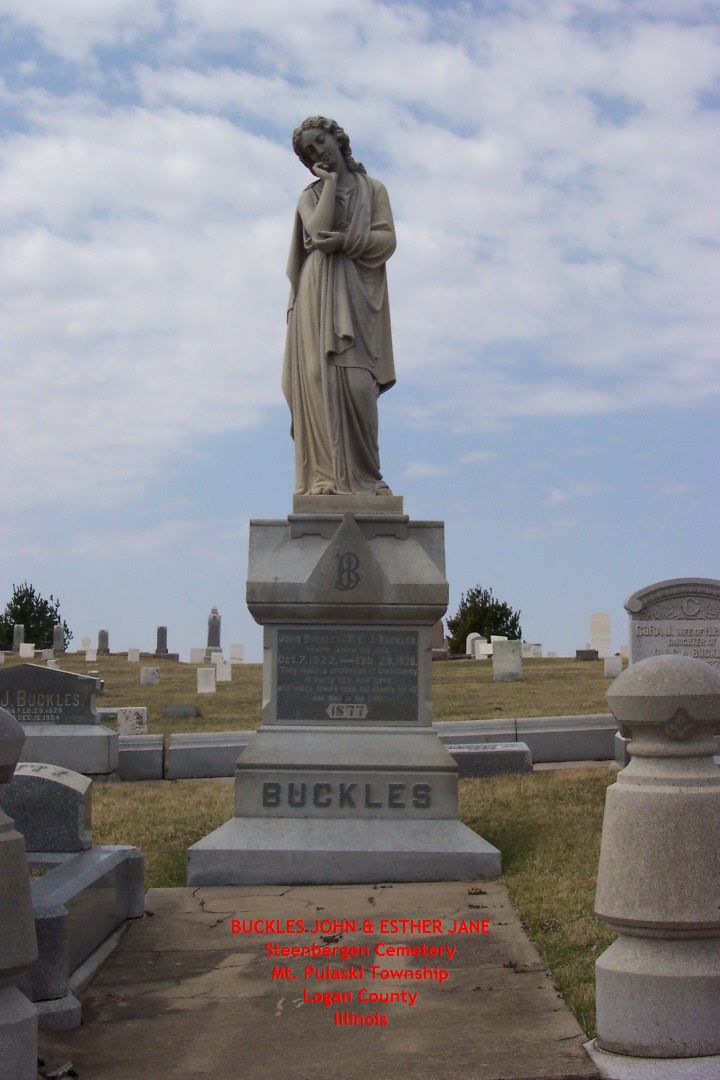 This angel marks the Buckles enclave at Steenbergen Cemetery, Mt. Pulaski Township, Logan County, Illinois. Note the “wall” in the background which surrounds this group of stones.

This stone is for John Andrew and Esther Jane Scroggin Buckles, my great great great grandparents. Despite the 1877 date on the stone Esther died December 16, 1904, and John died July 6, 1909.

We all have multiple lines we are researching. It seems I pay more attention to some lines and less to others. I field more queries about those lines and am generally more familiar with them. The other day I got an inquiry about a line and I couldn’t recall the details. Then I realized I haven’t had an inquiry about that line in years.

There was a time when I had so many inquiries on that line my expert sent his GEDCOM file so I could just pull it and find out a few things, decide where to sent the researcher for more. In those days my internet connection was dialup and things were slow. Now internet is always on and generally fast. I realized that I didn’t even have a bookmark for the database my expert has developed [and keeps up] so I hadn’t had an inquiry since I moved five years ago.

I could say it means interest in lines goes in spurts and that’s probably true. It also means I have neglected to keep up with my genealogy. I’m more organized but I’ve gotten sloppy on the lines no one asks about, particularly when there are others who are paying attention to those lines.

Is it possible to keep up with all the lines? Is there a formula for how much time to devote to each one? Is it okay to forgot some lines because others are devoting all their time to them? Contrary to what some might suggest, we cannot possibly do all the original research on all our ancestors. What is the compromise?