In 1900 only 18 states [including future states] registered vital records. It was not mandatory in all of those, but it was encouraged.

Illinois did not mandate the registration of vital records with the state until 1916. Marriage records were always kept but birth and death were not. Logan County has marriage records back to 1857 but marriage records also exist for 1820-1839 under Sangamon County at IRAD. The only missing records are those for 1839-1856 due to the courthouse fire.

Logan has sporadic birth and death records dating to 1878. Probate records go back to 1855 and, again, there are earlier records at IRAD. Deeds go back to 1829. Court records date to 1857. Initial land purchases from the beginning are at the Bureau of Land Management.

Last year I scanned all the paper. Bits and pieces keep showing up but, for the most part, I am current on scanning my documents. See Ancestor Hunting if you are interested in the details of how I did it.

Pictures are another story. I mentioned late in the series that the pictures were not done. They are still not done. In the interim one of my brothers [who never used a computer until very recently] has taken all the pictures he had and scanned them. Yes, he put me to shame. He has the same problem we all do — we don’t know who a lot of these people are.

If the picture is from my lifetime I can make a pretty good guess and probably find someone who agrees or recognizes themselves. Before that it is a guess. It may be an educated guess but it is often a guess. Further, others may disagree and there is no way to determine the truth. I need to work out some details [posting multiple pictures is not my greatest skill] but I think I will do it. If it works maybe other pictures can be added.

So I was thinking, almost all of my pictures came from Logan County so maybe posting them on a web site with a Logan County connection will help identify some of them. Maybe it would encourage me to get cracking on the scanning too. 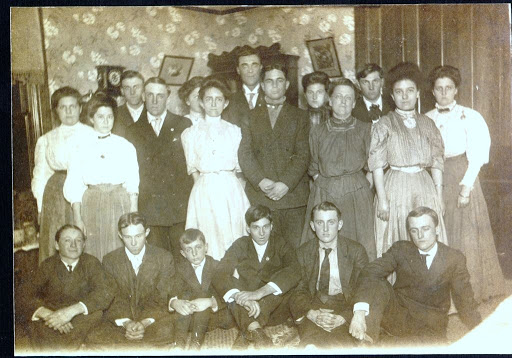 Each year about this time we start thinking of those cemeteries we are going to walk or at least visit as soon as the weather allows. Visiting a cemetery in the city is very different than visiting a small rural cemetery in the middle of nowhere. If a rural cemetery is on your list here are some tips for that visit. Much of this has been posted before on one of my other blogs.

Cemeteries can be pretty remote with no one to see or hear you and quite possibly no other visitors for a long time, particularly if the cemetery is inactive.

Know how to get there. In some counties you can pick out a cemetery from several miles away [it is the only spot with trees] but that is not true everywhere. Google and Microsoft have detailed online maps. You can search GNIS, the government’s geographic names database at: http://geonames.usgs.gov/pls/gnispublic/ for location and then plot it on the map of your choice with a couple clicks. Don’t forget the map.

If there is a map of the cemetery or an online listing of any sort that gives you clues on how to locate the particular stone print it out and take it along. USGenWeb sites often have cemetery listings, sometimes maps or layouts. Make a note of the people buried around your ancestor so if for some reason their stone is unreadable you’ll know you are in the right place and can go from there. Stone lists for Logan County can be found at http://logan.ilgenweb.net/stonelist.htm.

Wear a hat and take plenty of water. The only drinking available is highly likely to be what you brought with you. Dehydration is dangerous. Someone suggested if you drink too much water you’ll need the facilities and the cemeteries have no facilities. I’ll leave it to you to figure out how to deal with that situation in the middle of nowhere. If you plan to be at the cemetery awhile you should take some snacks or even pack a lunch along with the water. In olden days people often picnicked in cemeteries. You can too.

Don’t go alone if you can avoid it. Take your cell phone. You could have trouble with your vehicle. [This is the voice of experience long before cell phones. It was a LONG walk.] You could fall and hurt yourself or even break something. The ground will not be smooth and level. Stones have been known to topple. Some places, particularly where cemeteries are not mowed regularly, have critters [they dug those ankle wrenching holes] or stinging bugs. Be safe. Take a friend and a cell phone. I always have a first aid kit in the car.

Take your camera with a large memory card but don’t forget pen and paper or a recording device. If you record on tape or digitally be sure to spell everything out even if it is spelled wrong. You might want to have your camera date each photo. If it is small cemetery do yourself and fellow researchers a favor and photograph each stone. You are there. It is an act of genealogical kindness. At a minimum draw a map of the stone location area so the next person can find the stone.

Recently I read an excellent suggestion from Jean Hibben. She takes a picture of the cemetery entrance first and then the stones. That way your pictures are partially organized when you download them.

Berryman was the son of Solomon and Phebe Lucas Wood. His parents came from Greene County, Ohio, with the migration of church members who formed the Lake Fork Predestinarian Baptist Church in Logan County, Illinois. Phebe’s parents, Abraham and Marcy Kelsey Lucas, and living siblings also made the move. The couple bought land and settled at Rocky Ford in Corwin Township, about 15 miles from the rest of the family. Berryman was born there on December 22, 1834.

What happened next is a mystery due to the 1856 courthouse fire. We know that Solomon Wood was the second coroner of Logan County. We know Phebe died after 1839 when her last child was born, probably before Solomon sold his land on what is now Lucas Chapel Cemetery and moved in 1842. [Land records survive.] It assumed that Phebe is buried in Lucas Chapel but time and the regular spring flooding of Salt Creek have erased all traces of burials in that section of the cemetery.

Solomon remarried by 1847 and his last child was born February 23, 1848. Less than two months later Solomon was dead. Rhoda Tuman Winn Hoffman Wood, the widow, was Administrator of the estate [notice published in Springfield paper]. On April 23, 1849, the widow deeded all interest in Solomon Wood’s land to his heirs and they in turn deeded all interest in her premarital property to her. John Lucas signed as guardian of Joel, Berryman, Lucinda, Rebecca and Solomon. By 1858 the record indicates Ezekiel Bowman was guardian of the two remaining minor children, Solomon and Rebecca, and executor of the Wood estate.

Berryman was apparently raised by John Lucas, his mother’s brother, who was married to Sarah Bowman, a sister of Hannah who was the widow of James Lucas, another brother of Phebe. [Remember this. It will come up again.] Ezekiel Bowman was their brother. The 1850 census lists him as “Benjamin.”

The above picture is of children and grandchildren of Berryman B. and Sarah Katherine. We suspect it was taken when they gathered after Sarah’s death. They placed a stone for her.

The rest of Berryman’s life is also a mystery. My grandmother remembered him with love and amusement. No children or grandchildren survive and almost all of the great grandchildren have died. No record of Berryman’s death has been located. We know it was 1911-1915, probably 1912-1914. When he died no one put up a stone. Years later a grandson made a marker out of concrete and put it on the grave. The death year is unreadable.