I know about the prior four Revolutionary War Veterans buried in Logan County, Illinois, because I descend from all of them.

There is at least one more and possibly three more.

One is Henry Kimes. According to an early work on Illinois veteran burials, he was born in Chester County, Pennsylvania, and served in the Chester County Militia in 1780, 1781 and 1782. It says he went to Logan County, died and “is buried near Lincoln.” Actually he is buried in Atlanta Cemetery. I have seen a photo of his stone. I have never run across a descendant. Source given for the information is Pennsylvania Archives.

The same book lists a Peter Borders who “served in the South Carolina troops.” It says he was from Newberry County and went to Sangamon County but died in Logan County. I have never seen evidence that he is buried in Logan County nor have I run across a descendant. Source given for the information is “Pension Records.”

Finally there is William Patterson. There have been various references to his Revolutionary War service. I have talked to descendants looking into a DAR membership based upon his service. I have not seen their research. He was born in Virginia in 1757. His first child was born in Botetourt County. We know he was in Ohio by 1809 when his son Thomas married there. From Madison County, Ohio, he came to Logan County with his son Moses before 1840. He died March 16, 1840.

Patterson was born in Virginia in 1757. His first child was born in Botetourt County. We know he was in Ohio by 1809 when his son Thomas married there. From Madison County, Ohio, he came to Logan County with his son Moses before 1840. He died March 16, 1840.*

I know more about him because one of his sons married Elizabeth Morrow, a daughter of James Morrow and Hannah Downing. A daughter married a William Frakes, brother of Hannah Frakes who married John Downing. These people are from the Downing line which is buried at Bowers-Templeman. For some reason, William Patterson was buried in Downing Cemetery, final resting place of the other Downing line. 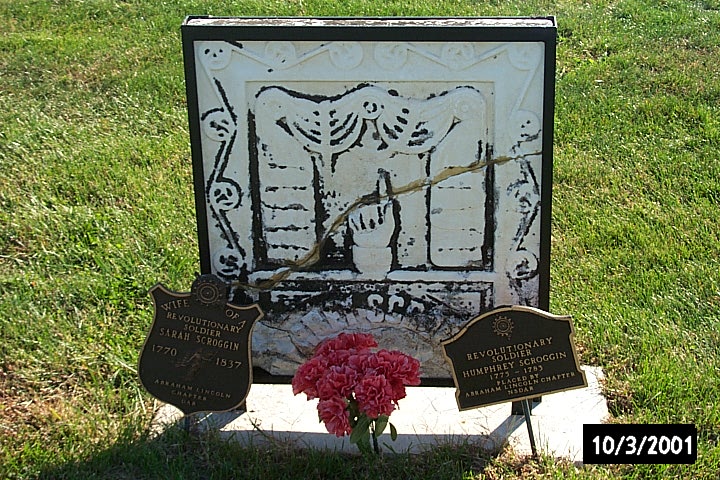