Originally, John got a Revolutionary War marker based upon his service in the company of Capt. James Scott, 3rd Battalion, Washington County Militia, Pennsylvania. He was a private 5th Class and can be found listed in the Pennsylvania Archives. DAR agreed. Later John and his extended family and friends traveled to Ohio and on to Sangamon now Logan County, Illinois. They even brought along James Scott.
(When I looked into this I couldn’t find anything about the James Scott except he traveled with John Downing. About the same time a James Scott joined the Lake Fork Predestinarian Baptists before dying in neighboring Macon County, Illinois. I could not swear it is all one person but it seems likely. Not that it mattered.)
Then it was determined that was not the right service for this John Downing. Nope. His service was in Capt. Timothy Downing’s Company, Washington County, Pennsylvania, militia. At least the location was correct. And probably the two Johns are related. A new marker was added to the old on at Bowers Templeman Cemetery just north of Salt Creek. The DAR participated in the ceremonies. That was 1977. 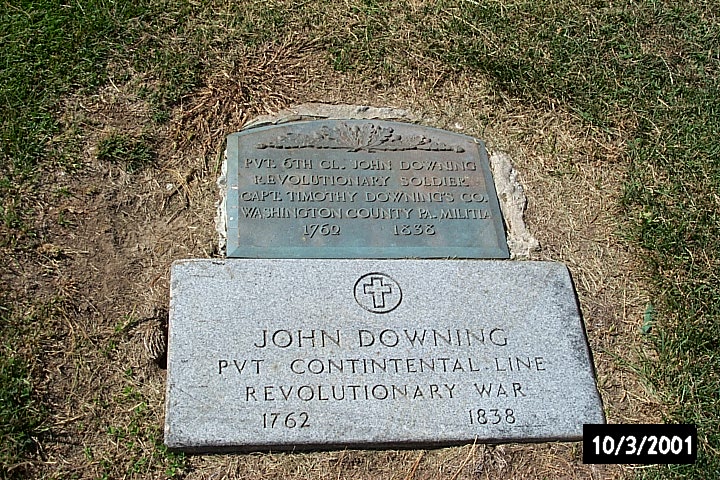 Then the DAR decided that wasn’t correct either. And the timing really was off. After the war John moved back east in Pennsylvania instead of continuing on west? That could not be explained.
Recently, DNA testing allowed Mary Lou Cole of Ohio to follow a theory. John Downing didn’t serve in Washington County, Pennsylvania, but Washington County, Maryland. Mary Lou is not a descendant of this particular Downing line but she was determined. There were naysayers, including me. She continued on.
On September 5, 2013, the DAR notified Mary Lou that they agree with her conclusions (and documentation of course) and John Downing is now officially recognized as having his Revolutionary War service in Maryland.
John Downing has three stones. He has his original, which goes with the stone of his wife Hannah, to go with the two in the photo. Will he get a fourth, this time with the correct service?